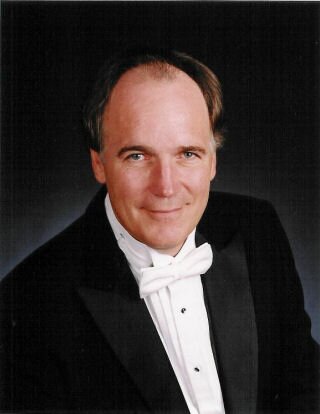 Music Director Jeffrey Rink, celebrating his tenth season with the NSO, has been proclaimed "an opera conductor to be reckoned with (T J Medrek, The Boston Herald), "among the best of his generation of conductors" (El Ecomonista, Mexico City), "a capable and committed operatic conductor" (Richard Dyer, The Boston Globe) and "Boston's pre-eminent Verdi conductor" (Lloyd Schwartz, The Boston Phoenix). Reviewing the 2002 concert performance of Tosca, the Boston Globe's Ellen Pfeiffer wrote: "This was a glorious performance of Tosca. Conductor Jeffrey Rink got to the heart of the opera and kept things moving at white heat."

Jeffrey Rink is Director of Orchestral Activities at the Longy School of Music, where he conducts the Longy Chamber Orchestra. He is in his 15th season as Music Director of Chorus pro Musica and is on the faculty of the University of Massachusetts-Boston. He conducted notable performances of Beethoven's Ninth Symphony and Handel's Messiah with the Handel and Haydn Society and of Nielsen's Fifth Symphony, Honegger's Third Symphony, Berlioz' Symphonie Fantastique and Stravinsky's Petrushka during his eight-year tenure as Music Director of the New England Philharmonic. Under Rink's direction, the New England Philharmonic presented over twenty premieres and was nationally recognized by ASCAP in three of those years for its adventuresome programming and commitment to new music.

Mr. Rink has appeared as a guest conductor with the Pro Arte Chamber Orchestra, the Baltic State Philharmonic (Poland), the Orquesta Sinfoníca de Monterrey (Mexico), and has conducted the Adrian Symphony (Michigan), the Tallahassee Symphony (Florida), and L'Orchestre de Sherbrooke (Quebéc). In 1993 he made his Asian debut, conducting concerts in Manila that featured Metropolitan Opera soprano Barbara Kilduff. Since 1995, Mr. Rink has lead L'Orchestre de Jeunes de Fribourg (Switzerland), the Nashua Symphony Orchestra (New Hampshire), the Tuscaloosa Symphony (Alabama), the Tokyo Philharmonic, the Tokyo Symphony Orchestra, the Ensemble of Tokyo, the Telemann Chamber Orchestra in Osaka, Japan, and the Filarmónica de Querétero in Mexico. In 2000 Maestro Rink returned to Japan to lead a performance of Bach's St John Passion, and conducted a highly successful performance of Mozart's The Magic Flute in the New National Theatre, Tokyo. Recent appearances include concerts with the Carlos Chavez Sinfonía and the Orquesta de Camera del Teatro del Bellas Artes in Mexico City and the New Japan Philharmonic.